NOTE: These pages continue to change as we try to provide convenience and options with the transition to online services. Media players on these pages will now default to audio, which is just the traditional sermon portion of the service. There is a control (director's clapboard icon) to switch the player to video. If available, it is typically the full service. You can also select the sermon title in any list of sermons, which will take you to a page with the audio/video options for just that service.

When Hope is Hard to Find 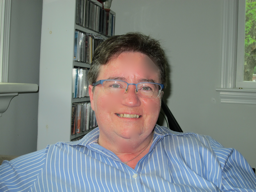 Justine Sullivan is currently serving as the interim minister at the Unitarian Universalist Church of Brunswick Maine.

Justine served as our Ministerial Intern from the fall of 2015 until June of 2017 while pursuing her Master of Divinity degree at Meadville Lombard Theological School in Chicago. Justine was ordained in 2017 by her home congregation of Northborough, Massachusetts.

Justine is a member of the UU congregation in Northborough, Massachusetts, where she lives with her spouse Dale.  Justine and Dale have been together since 1986 and legally married since 2004.  Justine has been a social worker and psychotherapist for the past 20 years and has worked as a congregational consultant and facilitator throughout New England.  In addition to serving in leadership positions in her home congregation, Justine served as president of the Clara Barton district board from 2012 to 2015